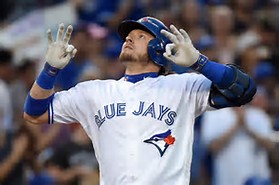 With the news that Josh Donaldson has injured his calf, it isn't the same one that he injured last year, it might be a good time to look at how injuries might play a factor in the Blue Jays upcoming season.

1) Donaldson had an MRI and was diagnosed with a right calf strain. He was on crutches when he met the press on Sunday and expected to be on them for 2-3 days. He'll be recovering for 2-3 weeks which will still allow plenty of time for him to be ready for the regular season. Griff noted that, with the way he was dragging his foot, the prognosis may be optimistic. Last year he injured his left calf during the exhibition games in Montreal and it flared up from time to time during the 2016 season. Donaldson had been doing extra core exercises in the offseason to deal with the hip issues that also plagued him last year.

2) Kendrys Morales has his own history with injuries mostly because of a fractured tibia that has kept him off the field in various seasons throughout his career. The problem started when he hit a grand slam, landed on home plate and broke his leg. Here's the video.

3) Devon Travis had off season knee surgery, to remove a flap of cartilage  and is now just resuming sprints. He also had a bone bruise last year and this is the update..

"Travis said he's not feeling any pain, although he isn't certain the bone bruise is gone. He expects to increase his lateral movement over the next few days."

4) Newly signed Steve Pearce has recovered from surgery on his right forearm and according to Atkins, is expected to be the Jays starting left fielder with Smoak taking the bulk of the time at first base.

5) Russ Martin had orthoscopic knee surgery, to repair his meniscus, which led to concerns and uninsurable for the WBC. According an interview, Russ is fully healed and his meniscus is fine.

6)There's been nothing reported on Marco Estrada's herniated disc, that bothered him at the end of last season. At least that I can find, so if someone has an updated report, feel free to link it.

7) I also haven't seen anybody report on Bautista'a arm ( shoulder?) issues but he did pass the physicals for his new contract so maybe there's no problem?

There will be more injuries, I doubt from sprinkler heads, that problem has been fixed, so here's hoping that they'll be few and the depth options remain that way. Depth options.
Posted by RADAR at 7:00:00 AM