Oh. My. God. What is this sorcery? Since when is Blue Jays Base-Ball allowed to be on TV? In an actual broadcast format? With ballpark noises as well? As JitH stalwart Joe McD. would say: "Well, I'll be jiggered!" Thomas Hatch starts today, with Nate Pearson, Julian Merryweather, and Bryan Baker battling day-to-day injuries.
Baseball related, but not specifically Blue Jay related, Rob Manfred is once again trying to remove brain and nerd power from baseball. This is just my humble opinion, but since he took over in January, 2015, there's been an assault on teams attempting to gain an advantage by using data, analytics, and brain power.
This time, it's the shift, for which rules are being implemented at AA. The rule states "the defensive team must have a minimum of four players on the infield, each of whom must have both feet completely in front of the outer boundary of the infield dirt." Pending the statistical outcome of this change, "MLB may decide to then require two infielders to be positioned entirely on each side of second base in the second half of the Double-A season" Seriously? What is this, little league?
The two principal reasons seem to be to allow the athletes to demonstrate their athleticism on the field, and to boost on field action because homeruns, strikeouts, and walks have become far too prevalent in the game. Could somebody please tell me when the beer leaguers showed up to replace the athletes in this game? Baseball has never been more athletic.
Also, Mr. Commish, players like to make money. Homeruns and walks are (and should be) two stats that financially reward position players. Teams like to load up bullpens with stuff guys to strike hitters out, in order to not allow balls to be put into play. Pitchers who can strike guys out at higher rates are always going to be better compensated. It's simple economics, and messing around with the shift is not going to change that one iota. What it will do, is raise the runs per game league wide.
The last five years (2016-2020), the R/G average MLB wide has been 4.48, 4.65, 4.45, 4.83, and 4.65. That level of offense is probably on the high side, if you view things from an historical perspective, so why do we need MOAR? Not trying to side with Wince here, but I'm having a tough time remembering the last time rule changes were made that benefitted the pitchers?
You want faster games right? Slugfests don't help that cause. I'm all for the occasional 11-9 barnburner, but if you keep hammering on the pitchers, the 2-1 pitcher's duel is gonna completely disappear. It probably already has with today's starting pitchers not being allowed to face more than 18 batters. If you're good, you might get 27, and if you're very good to elite, you'll probably be given a longer leash.
Other rule changes include larger bases (18 square inches, up from 15 square inches) at AAA, which will shorten the distance between bases, and theoretically allow for a slightly better success rate for stolen bases, and the frequency with which a batter reaches base on grounders, or bunt attempts. Here's an idea. How about we take the slick coating off the bases to prevent runners from slipping on bases when it's raining during the game. Just a thought. Also, more help for the hitters I see.
We have reached the mid-way point of this terribly long winded, and cranky old man rant, so here's what should be a staple of game threats. Take note game threat writers. The dog GIF:

I know it's not Christmas, but I couldn't resist.
A "Step off" rule for pitchers at High-A ball. Pitchers will be required to "disengage the rubber prior to throwing to any base, with the penalty of a balk in the event the pitcher fails to comply." The thought is that this will increase both stolen base attempts, and the success rate of said stolen base attempts.
You know what else it will lead to? More balks. I don't know about you, but when I set out from home to go to the ballpark, I always get that jolt of adrenaline in anticipation of seeing how many balks there'll be. The last time they tried to monkey with the balk rule in 1988, the balk rate tripled.
The rule was reversed after that season, and the balk rate returned to where it should be. It also puts something else into the "at the umpire's discretion" category, and goodness knows I love umpshows. And the pitchers are once again left saying, "Over here...What about me?"
Low-A brings a couple of changes that I can fully endorse. "Robot umps", or the automated ball-strike system (ABS). HALLELUJAH!!! Fast track that puppy please. A 20-second pitch clock? Yes please. The problem is that the union is dragging their feet on this one, and it won't even be discussed for MLB until the CBA expires on December 1, 2021.
Also, pitchers will be limited to a total of two step offs or pickoffs per plate appearance, while there is at least one runner on base. Uh...Generally, pitchers don't attempt pickoff throws when nobody's on, because that would be rather dumb. This limit might be reduced to one, so it's probably going to make for a track meet again on the bases, and the pitchers?...Will not be happy.
So, that's a slew of rule changes, probably two of which (robot umps and a pitch clock, which is currently DOA with the MLBPA) will benefit pitchers. Why do we keep doing this to them? Are they not part of this league too?
It also looks like minor league schedules will be pushed back at least one month, which means every non-26 man roster player's dream: The alternate training site. w00t!!! Thankfully, and mercifully, this rant is now over.
Today's game is scheduled for...Are you ready for this?...Drumroll...7.5 innings. What. The. Actual. Fuck? Anyway...
Blue Jays lineup: 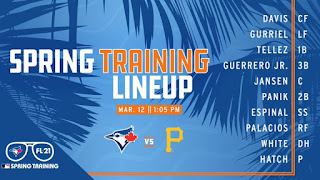 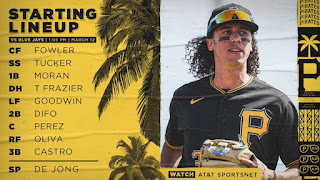 Cole Tucker's (pictured above) got some serious flow. Not better than Bo's, and their team can't match our team in the salad department, but credit where credit is due. Enjoy the game everybody!
Posted by Tom Jackson at 12:57:00 PM