I Can't Keep Up With You Yammering Animals, So Here's A New Thread 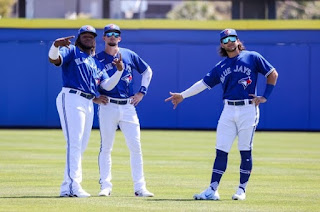 Check out this beauty linked to by Catcher
Damn you folks are chatty. Blah, blah, blah, blah, blah, blah...Four digit comments already? Fack! What's that? I made a quarter of the posts in the previous thread? Lies, untruths, and falsehoods! It was Joe and Dabs. I swear. No wait, it was he who shall remain nameless. I only had about six posts, and he did the rest. I am not responsible for this verbal diarrhea. Expecting baseball content? Well, you've come to the wrong place. This is merely a reset, with perhaps a few links for shits and giggles. I mean it. I'm tapped out. No more for you.
Hows about that pitching the last two days outside of Van Ick? Per Lunchy, 17 IP, 5 H, 6 BB, 29 K. That'll play. Offense will probably be there (don't listen to Dabble-Dee-Doom - he don't know what he's talking about), and there are lots of young arms that are here, very nearly here, and some more behind that.
I've been saying for a while that the 2021 pitching's gonna be like the 2019 position players. Bring 'em up, throw 'em out there, separate the wheat from the chaff, and go from there. It became quite clear after the position player wave that CF was a giant hole, and whoo boy did the front office ever get after that one this offseason.
Of course, I'd probably be singing a different tune had they landed a big fish for the rotation, but this is not the worst of outcomes. All in all, things are going well so far. #ThisIsTeam
We had some discussion about odd batting stances in the previous thread. Do you remember any (outside of Batista) that made you go WTF? Eephus pitches also entered the conversation, as well as the baseball treasure that is Zack Greinke. I don't really have much more, but it doesn't matter because I know y'all will weave an amazing comments section tapestry below this hatchet job, so I'll just cede the floor, and let you maniacs take over. TJ out.
Blue Jays @ Tiggers at 1:05 pm on Monday on Tigger TV.
It wouldn't be complete without the requisite GIFfery though, so...
Happy Monday everyone:

I guess this is the kangaroo equivalent of an unnecessary PED boost gone wrong:

Yes Dabs, I'm hitchin' a ride to the doggo GIFs:

Thou shalt not pass: