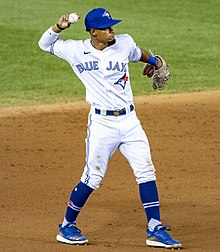 After splitting the first 2 games of the series, the Blue Jays were looking to wrap up the series and homestand with a win before embarking on their final road trip of the season, starting Tuesday in NY after the final off-day of the season Monday. Hyun-Jin Ryu was on the mound looking for his 4th win of the season, which would put him in the top 20 in the MLB. Cavan Biggio got his 1st career start at the hot corner. Jonathan Davis got the start in RF, Jonathan Villar was at 2B and Vlad played his 3rd straight game at 1B (a new record!). Danny Jansen was back behind the plate after the day off yesterday. Could the Blue Jays make it two series wins vs. the NY teams this week? Here is tonight's game recap.