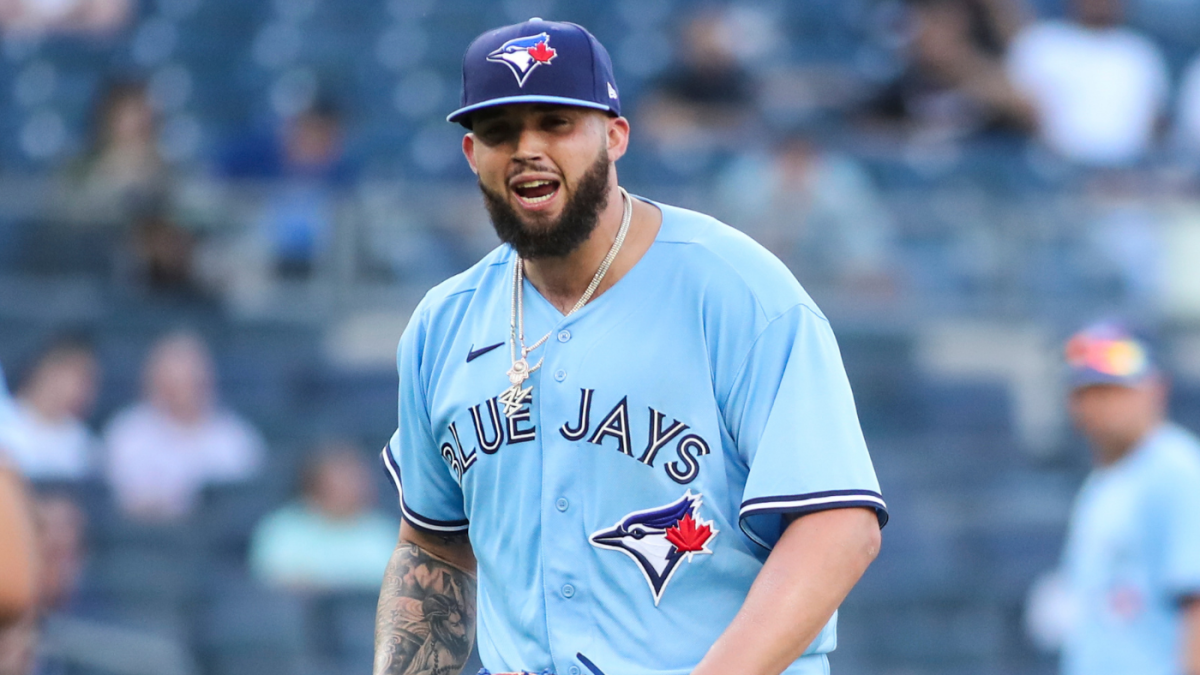 The 2022 Blue Jays season came to an abrupt end yesterday after an epic collapse in an elimination game where the Blue Jays were up 8-1 heading into the 6th inning. Alek Manoah was pulled with 10 outs to get and the Mariners torched a normally reliable bullpen for 9 runs over the next 3 innings and eliminated their expansion cousins. The Blue Jays had a solid regular season, winning 92 games, good for 2nd in the AL East, 7 games back of the NY Yankees, who had a monster 1st half, but came back down to earth in the 2nd half. The Blue Jays won 27 series, earned series splits in 6 series and lost 9 series. They swept 7 series and were swept 4 times. Charle Montoyo was fired after a disastrous road trip that saw them win just one and being swept in 4 games by the Mariners, who won 7 straight, including the WC series over the Blue Jays. Here is the final random thoughts post of the season looking back on the season that was and ahead to the off-season.

1. With every season comes injuries and this season was no different for the Blue Jays. The most significant injury was to lefty Hyun-Jin Ryu, who needed Tommy John surgery in June, putting him out until around the all-star break next season. Ryu is entering the final year of his 4-year deal. Likely, he'll be an option for the second half, assuming his rehab goes smoothly. Nate Pearson was never able to make it to the big league level. He missed the first few months of the season recovering from a bout of mono he suffered in spring training. Then during his rehab stint, he strained an oblique, setting him back another month. Julian Merryweather also missed a few months of the season after straining his oblique. The Blue Jays are hoping two flamethrowers can be bullpen options in 2023. Tim Mayza got a huge scare on August 6 against Minnesota when he dislocated his right non-throwing shoulder in a collision at home plate. Luckily he was back three weeks later and in time for the stretch run.

In terms of position players, the Blue Jays were relatively healthy most of the season, but there are definite concerns heading into the off-season. First and foremost, there is the banged-up George Springer, who has been dealing with a sore right elbow most of the season. He had a rough wild card series to say the least, getting hit in the left hand/wrist in his final at-bat of the 1st game and then having a horrible collision with Bo Bichette in the 8th inning of the 2nd game that forced him to be carted off the field. To be sure, Springer will need considerable time to heal from all his wounds, the most significant being his elbow and a possible concussion. Fellow outfielder Lourdes Gurriel Jr. saw his season end a month early when he pulled his hamstring trying to beat out a double play ball September 7. He tried to make it back for the postseason, but ultimately ran out of time. Second baseman Santiago Espinal, who strained his oblique September 21, was able to make it back in time for the postseason and played the second WC game. Catcher Danny Jansen had two injuries in the 1st half (April 6 he strained his oblique and June 6 he broke a finger on a hit by pitch) that required IL stints. All in all, the Blue Jays weathered the injury storm pretty well and avoided injury to most of their key players. Here's hoping everyone heals up in the next 4 months and are ready to roll for spring training next year.

2. One of the weaknesses of the Blue Jays this season was the 5th starter. Japanese import Yusei Kikuchi was inked to a 3-year deal to fill that role. Let's just say things didn't go according to plan. Kikuchi struggled with fastball command and command in general, which wreaked havoc on his pitch count. He finished the year 6-7 with a 5.19ERA in 32 appearances (20 starts). As a starter, he pitched into the 6th inning just three times and pitched less than 5 innings 10 times. His worst start of the season came on June 8 against KC when he couldn't get out of the 1st inning and threw a whopping 44 pitches. The Blue Jays tried to revamp his delivery during a 2-week IL stint, but ultimately, Kikuchi was relegated to the bullpen mid-August. Mitch White, acquired at the trade deadline was marginally better, but ultimately, every 5th day was essentially a bullpen day for much of the season. Acquiring a 5th starter in the off-season has to be a priority because it's not sustainable to have a bullpen day every 5th start,

3. Arguably, the turning point of the season came just prior to the all-star break when manager Charlie Montoyo was fired after 88 games with the team reeling through a 2-9 stretch and fighting to remain in the 3rd WC position with a surging Baltimore Orioles team fast closing the gap. There were extenuating circumstances with the slide with the team coming off a tough west road swing and dealing with the sudden death of 1st base coach Mark Budzinsky's daughter Julia, who lost her life on the Canada Day long weekend in a tubing accident. Montoyo was an even 236-236 in 472 regular season games managing the Blue Jays. The team made the playoffs in 2 of the 4 season (the 2020 abbreviated season where they were swept at Tropicana field to the eventual World series runner ups Tampa Bay Rays and this season). John Schneider took over the team and guided the team to a solid 46-28 finish and the top WC spot. The ending wasn't so swift, but Schneider has done enough to manage the team next year. The Blue Jays were much more focused and played hard for Schneider. He deserves to lead the Blue Jays in 2023.

4. The rest of the coaching staff may not be so lucky, Pete Walker, who has been with the team for a decade may be one of the scapegoats for the disastrous end to the season. The inability of the bullpen to get ten outs surely won't sit well with Atkins/Shapiro. Walker certainly didn't help his cause in spring training when he was pulled over for suspected drunk driving. During the season, several pitchers had bad seasons, including opening day starter Jose Berrios, who was unable to escape the 1st inning of opening day, Kikuchi, Hyun-Jin Ryu (prior to getting hurt) and reliever Trevor Richards among others. Bench coach Casey Candaele will also be scrutinized, as will hitting coach Guillermo Martinez with a major achilles heel being the inability to drive in runners in scoring position. The roster may not be the only thing changing for 2023, you may see a few different coaches in the dugout too.

7. Something that's going to be less of a factor next season with the league going to a balanced schedule will be divisional play. No more playing the Red Sox/Orioles/Yankees/Rays 19 times each. Instead, that number will be reduced to 13 games each. This season, the Blue Jays dominated against the Red Sox winning 16 of 19 games, including 9 straight and 3 straight sweeps. They scored a season high 28 runs on the Red Sox in a dominant start to the unofficial 2nd half of the season. Things were a bit closer against their other division rivals. They edged the Orioles 10-9 and had a crucial series win in September that included a double header sweep September 5th. They certainty were a key factor in preventing the resurgent Orioles from squeaking into the final WC spot. The Blue Jays were edged by Yankees 11-8. The Yankees handed the Blue Jays their first series loss of the season in early May and a couple of weeks later were the first team to sweep the Blue Jays. The Blue Jays exacted some revenge at Yankee stadium, taking 3 of 4 in Mid-August. The Rays also edged the Blue Jays in the season series 10-9. Due to the first series of the season being postponed due to the lockout, the Blue Jays played 5 games over 4 days twice at the Rogers Center (the Canada Day long weekend and mid-September. The Rays won the first of these series 3-2. While the Blue Jays won the 1st 2 games, the Rays won the next 3 with the team coping with the Julia Budzinsky tragedy. Things went better in September, winning three of five. The AL East won't be any easier to conquer with the Orioles no longer a laughingstock and the Red Sox and Yankees likely to get stronger in free agency and the trade market.

8. As the season comes to a close, Buck Martinez has called his final Blue Jays game. Martinez, who missed a couple of months this season due to cancer treatments, will leave a big void in the organization. He should be honored in some way next season, including throwing out a first pitch. Martinez has been with the Blue Jays for over 4 decades: as a player (1981-86), manager (2001-02) and broadcaster (1990-2000, 2010-2022). Happy trails Buck and thank you for being the voice of the Blue Jays

9. Finally, let's have a brief look at the upcoming off-season. First and foremost, the Blue Jays must make decisions on the coaching staff and John Schneider. Once that is done and any necessary changes are made, the next big task will be the roster. The biggest needs are another starting pitcher or two, more bullpen arms, a left-handed bat or two and maybe a SS (many fans are blaming Bo Bichette for the loss and want to see him shifted to 2B. The good news is, with the federal vaccine rules being lifted, the Blue Jays will have a bigger pool of players they can target. They had to let Robbie Ray and Steven Matz go in free agency last winter for that reason. In terms of free agents, the Blue Jays have three key free agents to make decisions on: Ross Stripling, Anthony Bass and Jackie Bradley Jr. Stripling has to be re-signed. He was the Blue Jays most significant starter. Bass may be retained as well, but Bradley Jr's days as a Blue Jay are likely over with a crowded outfield.

10. Blue Jay of the year: Alek Manoah- the true Blue Jays ace. He gave them a chance to win every start and threw 6 or more innings 25 times. Thank you all for reading my posts and I'll catch you guys next season