How the Minnesota Twins can win the AL Central 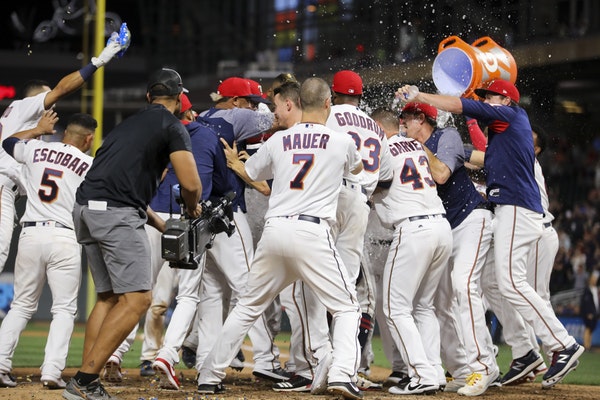 Minnesota is in an excellent position to be a major contender for the AL Central division simply because of the division they play in. Coming off a loss to the Yankees in the wild-card play-in game, their window of contention couldn't be opening at a better time, as the Royals, White Sox, and Tigers are three of the worst teams in baseball. Both Cleveland and Minnesota will get to face these teams just under 60 times in total, where the East and West have teams that are both deeper top to bottom, and even the A's and Rays have some interesting players and scenarios where they could be competitive. Wouldn't surprise me to see either of those two around .500. The three teams in the Central seem likely to be closer to the .350-.400 range. While Cleveland does have the same advantage, it seems like a two-horse race, and the Twins have a strong core of cost-controllable players in place and are aiming to acquire pitching to complement their core to compete with Cleveland to win the division for the first time since 2010.

The Twins seem to be sniffing around on all the available pitching on the market, including the best remaining pitcher on the market in Yu Darvish. One of him or Arrieta should sign soon, and I'd expect the dominos to fall once one of them do.

You're tweeting the wrong guy! Twins are waiting on Darvish. Nothing happening until there is resolution on that front.
— Darren Wolfson (@DWolfsonKSTP) January 7, 2018


While I'm not convinced that Darvish is actually going to sign there, the fact they are involved is an encouraging sign. This tells me that they acknowledge their need to add to their pitching staff. Alex Cobb or Lance Lynn could also be options, and they could pursue some of the controllable pitching rumored to be available in trade such as Chris Archer, Gerrit Cole, or Julio Teheran. I think it's safe that they will acquire at least one or two experienced starting pitchers to go along with the injured Micheal Pineda, closer Fernando Rodney, and lefty Zach Duke they signed so far this winter.

The Twins are in a position where they have money coming off the books after this year with Joe Mauer and Brian Dozier set to hit free agency in 2018. They have $47.5 million committed for 2019, with $72.5 million committed in '18 (with a few guys heading to arbitration).  So they are positioned well to spend and could see this as a good opportunity with a lot of big market teams worried about luxury tax and saving for next off-season. One interesting note - Phil Hughes has basically the same contract as Kendrys Morales, at $26 million over 2. Homer's Bush mentioned an idea in the previous thread of trading Morales for a similarly priced player - Minnesota is actually a team that could view Morales as an upgrade to Kennys Vargas or Joe Mauer, and insurance to a potential Sano suspension. Phil Hughes is pretty bad though, I'm not so sure he would still fall into the 'serviceable 5th starter' category though. It would provide the Jays flexibility with the DH position, and the Jays could probably get a prospect in that scenario. Mauer also is owed $23 million but is off the books in 2019, if the Jays preferred to have more money available in 2019 on that could be another contract for contract swap possibility. Morales is owed the exact $23 million but spread over two years. The Jays would have more money to offer Donaldson and Minnesota would have more money to offer one of the starting pitchers on the market this year.

Two players that they currently have under current control are Byron Buxton and Jose Berrios. Both have elite upside, and Buxton has already shown some signs of a breakout in the second half of 2017. The Twins ZiPS projections have them at 3.2 and 3.3 zWAR respectively, and it's easy to see how either could beat those projections easily. Buxton is like a faster Kevin Pillar with a better first step and made some changes to improve defensively in center field. He produced 3.5 WAR last year despite the poor start, and if the improvements made at the plate are real he could take the jump to superstar status next year. Strikeouts (and subsequent low contact rates) are definitely still his main concern because he has a profile that would likely keep a high BABIP: he hits the ball really hard and can run really fast. Berrios is the type of pitcher that I like. If you look past his poor 2016 debut, he really pitched well in 2017, throwing 145 innings last year, as well as 50 in the minors. He could be a rare guy to hit the 200 inning mark next year if he stays healthy. He was 14-8 with a 3.89 ERA (3.81/4.51 FIP/xFIP), good for 2.8 WAR. It doesn't take much for both of these players to exceed the current projection.

After Berrios, you have Ervin Santana, who is coming off a good year in 2017 and is still a little underrated. Back to back 3 win seasons, I think it's safe to put him in that range again, even though he pitches to contact and outperformed his FIP last year. Having Buxton in CF helps make that possible. He's almost the right-handed version of Jose Quintana-lite, who will give you reliable innings every 5th day. So far that's two guys who can log a lot of innings. I'm confident they will add another top of the rotation arm to slot in around the top 3 spots and run out Kyle Gibson (projected for 1.9 zWAR) to give them a 4th. To round out the rotation, they have prospects Adalberto Mejia, Stephen Gonsalvez, and Fernando Romero who are around the middle of top 100 lists and could either provide options to fill the roles or currency to use to trade for another pitcher. Pineda had Tommy John surgery last July so an optimistic 14 months would put him right around September. While it's unlikely he can contribute much this year, I liked the signing, similar to the deal the Cubs gave Drew Smyly. Interesting option if the Twins do make the post-season as he might be able to work out of the bullpen depending on how the rehab goes.

The Twins have a mid-ranked farm system, headlined by 2017 first overall Royce Lewis. I would say Nick Gordon would have the biggest chance of making an impact this year, as the younger brother of Dee Gordon can provide flexibility up the middle to provide depth behind Jorge Polanco and Brian Dozier. I'm a big fan of Dozier, he reminds me of Ian Kinsler. Good at everything he does. Their career WAR lines up very similarly at the same age. Jorge Polanco is interesting as well, he seems like a pretty useful player.

Here is the Twins projected lineup, according to Roster Resource:
Dozier, Mauer, Sano, Rosario, Polanco, Buxton, Kepler, Escobar, Castro
While Sano might miss some time due to allegedly being a shitty person, that doesn't look like a terrible lineup to me. I might flip Buxton and Mauer, but I'm sure Paul Molitor can figure something out that will work between now and the end of camp. I'm not sure exactly how much money they have to spend, but I think that pitching is and rightfully should be their biggest concern. They might try to upgrade at some point if they have anything left in their budget, especially if they find out about a suspension for Sano. J.T. Realmuto might be a fit too, from the rebuilding Marlins.

In order for them to win the AL Central, a couple of things will have to break right. Buxton and Berrios having breakout seasons would help in increased star power, but this is a team with few weaknesses outside of pitching, and that could potentially get addressed before the season. The bullpen isn't particularly strong but they may be able to build one on the fly or have someone from within emerge. Rodney is not really a likable guy but seems to be a reliable veteran closer, even if his projected zWAR is lower than literally everyone else penciled in the bullpen. Cleveland didn't necessarily get any better thus far in free agency - they lost Carlos Santana, Boone Logan, and Bryan Shaw to free agency while signing regression candidate Yonder Alonso. The Twins realize that they're in a unique position with the division seemingly up for grabs and free agents that normally wouldn't consider Minnesota an option might be convinced to sign. I wouldn't go saying that all the divisions are locked up in the American League just yet. If for no other reason than, well, baseball.
Posted by Nego at 7:00:00 AM