The Hall of Fame in Cooperstown, N.Y.

Greetings, JITH denizens... hope the New Year is treating y'all well so far. A big hand-clap to Nego for his Monday post on the Minnesota Twins.

With the lack of baseball news of late, it's time for a Hall of Fame update!  Especially since this could be a historic vote -- based on the most recent projections, we could be in for the first five-man Hall of Fame class since the inaugural ballot of 1936 that saw Christy Mathewson, Babe Ruth, Walter Johnson, Ty Cobb and Honus Wagner voted into the Hall.  There's a very long-shot possibility that we'll see 6 voted in.

There are two different projections out there - one is by Ryan Thibodaux, who has been collecting data on revealed votes for a few years now.  His tabulations as of Monday the 8th:

He has turned "unskewing the results" into a science - last year, he correctly predicted every player's total within 3.5 percent, with an average of 1.5 off. 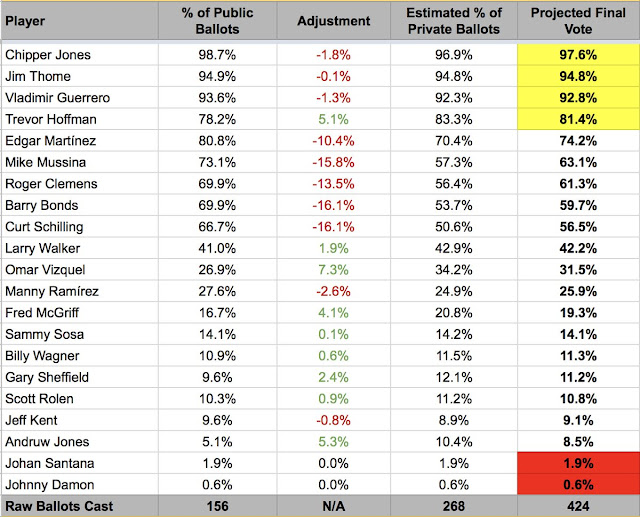 Some observations:
It's fantastic to see that Edgar Martinez is finally getting his due and here's hoping that he picks up that extra 1% (by Rakich's breakdown) to get in this year.  Ditto with Larry Walker who looks like he'll double his vote total from last year; with two ballots to go after this one, he'll bear watching to see if he can make a significant-enough leap.  (Don't hold your breath, though)

And it's a complete travesty that Andruw Jones is only getting 5.3% so far and in danger of falling off the ballot while Omar Vizquel is at 29%.  Ridiculous.  Jones matches Vizquel in terms of sublime defensive prowess and he's a far better offensive player. I don't think Jones is a HOFer but he's not 24% less worthy than Vizquel.


Larry Walker as a HOFer: 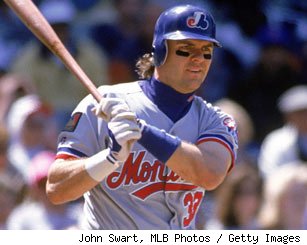 Speaking of Larry Walker, it's time for my annual stumping for him with some new info gleaned elsewhere.  This new tidbit helps make the case that Larry Walker should be a Hall of Famer:

Joe Posnanski has accumulated top-100 lists in three categories - batting runs, fielding runs and baserunning runs.  Only three in baseball history has made it into the top 100 of all three categories.  Take it away, Joe...

Last year, I put together a spreadsheet that had the top 100 players in three categories. (Yes, this is the sort of thing I do in my spare time.)
The three categories -- all pulled from Baseball Reference's excellent search tool -- were:
1. Batting runs
2. Fielding runs
3. Baserunning runs
The idea was to see just how many players in baseball history ranked in the top 100 in more than one category. See, there's something about the National Baseball Hall of Fame that few people know: Most of the great players in baseball history were great at one thing. They might have been good or average at multiple things, but generally speaking, they were great at one thing.
Frank Thomas. One thing. He was great at hitting baseballs very hard.
Ted Williams. One thing. He was great at hitting baseballs very hard.
Jim Thome, who will be elected this year, was great at one thing: hitting baseballs over fences.
Now, you could say -- and you would be right -- that hitting is more than one thing. The three guys I listed above all were not just great at hitting the ball, but also great at getting on base by drawing walks. Also, the single act of hitting a baseball is the most important one in the game … and it takes multiple skills.
But my point is -- and my top 100 spreadsheet proves it -- very few players are all-time greats at more than one part of the game. Babe Ruth ranked in the top 100 in one category. Lou Gehrig, Rogers Hornsby, Stan Musial, all just one category. Even players who were widely acknowledged to be great all-around players, such as Barry Larkin and Joe DiMaggio, showed up in only one category.
Larkin made only the top 100 baserunning list, and DiMaggio made only the batting list (though it's worth noting his career was shortened by World War II).
So you can see: This is exclusive territory. In all, 34 players made the top 100 list in multiple categories. These are the players you would expect, for the most part. Players who made the list for batting and fielding included Roberto Clemente, Carl Yastrzemski, Mike Schmidt, Albert Pujols and Al Kaline. So did John Olerud, a bit of a surprise.
Players who made the list for batting and baserunning included Derek Jeter, George Brett, Joe Morgan, Ken Griffey Jr., Rickey Henderson (of course), Ty Cobb, etc.
And then a few speedsters made the list for baserunning and fielding, including Ichiro Suzuki, Luis Aparicio, Ozzie Smith and, interestingly, Chase Utley.
That's not all of them, but you get the idea. But now comes the big finish: Only three players appeared on all three lists. THREE.
One is Willie Mays, though you probably knew that.
One is Barry Bonds, and you knew that, too.
And Larry Walker is the third.
..........
Time to put Mr. Walker into the Hall of Fame.
Sorry I haven't been around as much as I'd like - some family health issues going on.  Cancer can fuck right off.
Posted by macgyver13 at 7:00:00 AM