As most of you surely know by now, I am a "lover" of baseball cards (as well as hockey, basketball, and non-sports!) and spend a significant amount of time thinking about them, reading about them, and collecting them.  I was born in the late 70's and ever since I first spotted the 1982-83 OPC hockey stickers in my local, small-town pharmacy in Saskatchewan, I've been hooked.  I moved on to other interests in my teenage years and 20's but came back to it more recently, stronger than ever.  With the lockout there is essentially no real-life content to discuss at this time so I plan to create a series of articles about baseball card history, with some other sports mixed in, to a lesser degree.  There is no specific plan other than starting in earlier days and making my way to modern times, discussing only topics that interest me, while ignoring those that don't.

The oldest baseball cards I own are from the famous 1909-1911 T-206 set (the one with the notorious Honus Wagner card).  We'll get there but let's start a bit earlier.  Though there were a number of early examples of "Cabinet Cards" and photographs, many collectors consider the 1887 to 1890 N172 Old Judge "issue" to be the first true baseball card set. 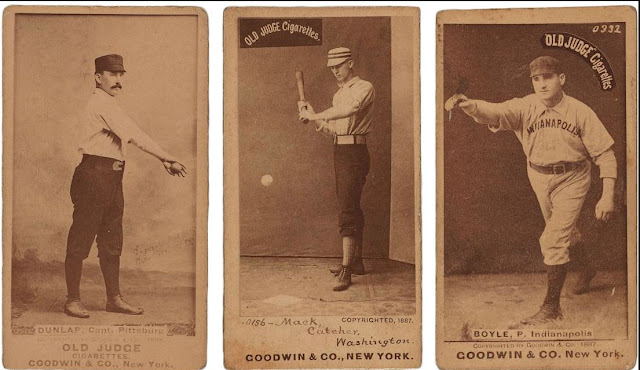 These blank-backed cards were issued in both Old Judge and Gypsy Queen cigarette packs over a period of about 4 years.  Unlike most modern cards, the photographs were taken in a studio and you can sometimes see strings holding up baseballs and other equipment.  These photos are very clearly staged, though there is some remarkably good photography for the time.  The sepia photos are pasted onto a blank cardboard backing.  There are about 500 players included, which makes it a large set.  You might say to yourself "that's a lot of expensive cards to buy but I can do it over a period of decades!".  However, many of the players have multiple poses and variations.  Further, there are a lot of cards that are rare to extremely rare.  Looking at the set as a whole, you would be collecting at least 4500 unique cards and there are still new players and variations being found on occasion, all of which are exceedingly rare and expensive.  Nobody is known to have completed the set (to the degree that is possible) or even come close.

Many of these cards have started to "fade", which makes it difficult to identify them and might also worry long term collectors - it would be unfortunate to own a valuable card that eventually ends up being blank! 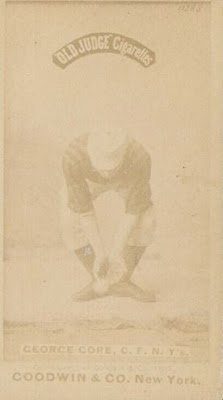 It currently costs a minimum of $100USD to obtain a single example from the set.  This would generally get you a card that is badly faded, horribly creased, with rounded corners, possibly with paper loss and/or writing on the card.  The pricing then goes up from there.  Making it even tougher to collect, the set includes a decent collection of stars and Hall of Famers, including Cap Anson, Jack Beckley, Stephen Behel, Dan Brouthers, Pete Browning, Charles Comiskey, Roger Connor, Ed Delahanty, Hugh Duffy, Buck Ewing, Pud Galvin, Clark Griffith, Dummy Hoy, Bid McPhee, Kid Nichols, Jim O’Rourke, Old Hoss Radbourne, Amos Rusie and Harry Wright.  All of these have significant price tags and most have multiple variations to collect.  Serious collectors of the set are generally very wealthy. 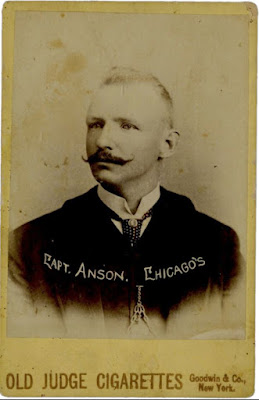 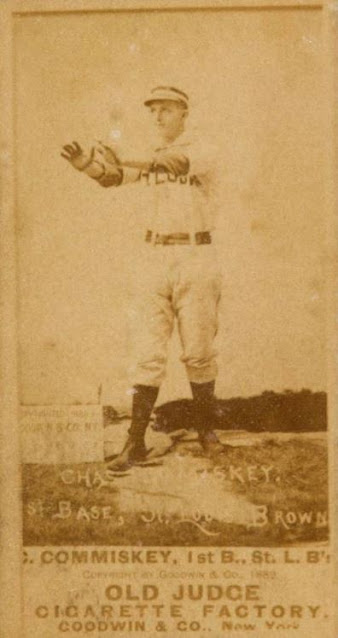 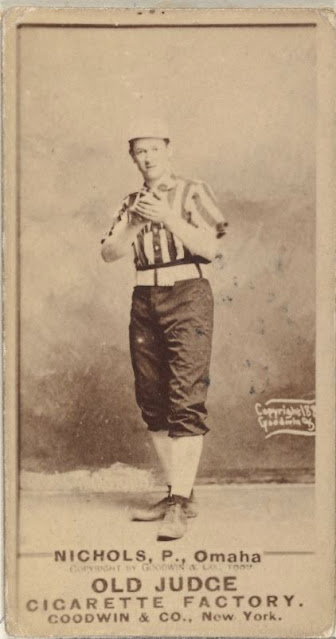 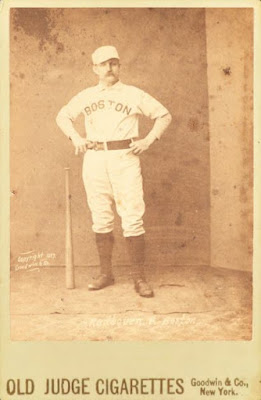 Sadly, I suspect everyone on this site is doomed to never complete the Old Judge set.  Myself included!  However, a popular way to collect Pre-War (Pre WW2) cards is to have a "Type Collection".  This means that you simply collect one card from each set, bowing to the obvious financial impossibility of trying to complete almost any of the Pre-War sets in existence without a certain degree of wealth.

Now, we reach the exciting giveaway portion of the post.  Whoever can first tell me the year the baserunner started to be declared out when struck by a batted ball will win:

As many Blue Jays baseball cards as can be safely stuffed into a standard-sized envelope!  These will be a random age, from random sets, anywhere from the 80's to present day!

Good Day to you!