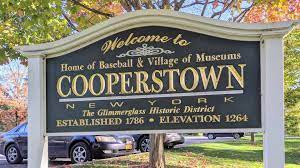 Greetings, all... welcome to my (now-almost) annual Hall of Fame announcement post.  Few things get my tail as bushy in anticipation as discussion about the Hall of Fame, so here we go!

First, I'll post the voting results released today along with my observations and viewpoints, then will offer a projection for upcoming HOF ballots and see who might get in over the next few years.

Congratulations to David Ortiz for being the only player voted into the HOF this year. 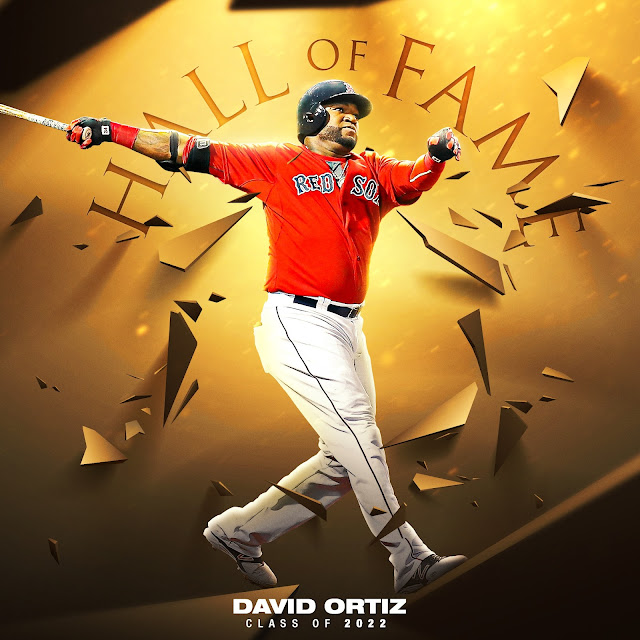 My analysis:  Not really a surprise that Big Papi was the only one to make it as he's had quite an impactful career, particularly in the post-season.

I've got some mixed feelings about how to handle the PED/cheater/alleged cheater thing.  Really, the HOF voting process needs to be clearer in how they should handle these situations instead of leaving it up to the writer's discretion.  Without a clear mandate, how can one vote for, let's say, David Ortiz with his rumoured involvement in the Mitchell Report but leave out Sammy Sosa with the same scuttlebutt?  Manny Ramirez and Alex Rodriguez are a little more clear cut as they were both busted and served long suspensions.  But if you subscribe to the belief that Bonds and Papi both did or probably did "something PED related", then can you really vote for them and leave Rodriguez out as A-Rod was a far better player than Papi?

Where do we draw the line with cheating or enhancing? Until that line is clearly established, the Hall of Fame voting will always be a mess.  Apples and oranges with entirely different situations, yes, but if we say okay to known cheaters going in, then what about guys like Shoeless Joe Jackson and Pete Rose?  Betting on own team is a form of cheating that impacted other players and damaged the integrity of the game just like juicing up impacted and took away jobs from clean players.

Personally, I'm not a fan of those with PED connections and they don't get my vote.  I also recognize the arguments in favour of including them in the Hall of Fame (i.e. a number of players in the 60s and 70s were hopped up on greenies or 'let them all in') and that's not to say that any of you might be wrong to lean that way.  Just....for me, no Bonds, no Clemens, no A-Rod, no Manny, no Sosa.

It's a topic that we could spend days arguing over without ever coming to a compromise.

Delightful schadenfreude to see Omar Vizquel tumbling to less than half his previous total of votes and to see that some writers have decided to listen to that piece of excrement Curt Schilling and boot him off their ballots.  Yah, maybe we should be looking only at what a player does on the field, but character is one of the criteria for determining the candidacy of a player.  We can't go back and undo the racists and bigots already in the Hall, but the writers can control what's in front of them now.  Go away, Curt.

With Bonds, Clemens and Schilling all coming off the ballot after this year, next year is suddenly going to be wide open. There's only one impactful player joining the ballot for 2023: Carlos Beltran, who has a complicated case for the HOF with his involvement in the Astros cheating scandal potentially overshadowing his loaded statistical chops.  A few holdovers will benefit from this glut of extra votes sitting around, in particular Scott Rolen and maybe guys like Todd Helton and Andruw Jones.

I would not be surprised if Rolen is the only one who makes it into the HOF next year.  The biggest jump might come from Andruw Jones as there's usually a "cause celebre" every so often, and Jones is about as good as a candidate as any as he had 61.0 bWAR and ten Gold Gloves at age 30 with 434 HRs for his career, but fading badly after age 30 is definitely going to hurt his case.  Still, he's a considerably better offensive player than guys like Ozzie Smith and Omar Vizquel whose entire HOF cases were based mainly on their defensive prowess.

2024 is going to be a big year for newcomers with Adrian Beltre, Chase Utley and Joe Mauer joining the ballot, so 2023 is going to be a good time as any for voters wanting to clear the ballots with borderline candidates (Helton, Jones, Wagner, and Jeff Kent in his final year on the ballot).  Whether any of the holdovers make it or not remains to be seen, but if they don't... they likely won't ever get in on the regular ballot as the following few years will feature some heavy hitters (i.e. Ichiro and CC Sabathia in 2025) or interesting candidates that may gobble up votes even if they never make it (i.e. for 2025: Pedroia, Tulo, King Felix, Russell Martin).

Beltre is a first-ballot lock.  Probably Joe Mauer, too, as he's the only catcher with three batting titles and also has a MVP and Gold Glove on his resume.  Chase Utley is going to be an interesting debate as he had an elite five- or six-year peak but also a rapid decline to meh-land.

2024: In - Adrian Beltre and Joe Mauer; Utley and Beltran both narrowly miss out. This could also be the year that Helton or Jones squeak in after some renewed campaigning in 2023 getting them closer to the 75% mark

Now... back to your regularly-scheduled programming, folks.