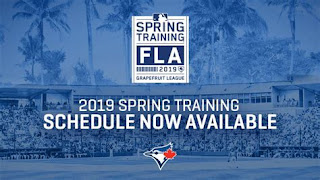 Well here we go. After a long, long boring offseason where a great number of teams seem to be in rebuild mode, where over 100 players remain Free Agents because again, teams are in rebuild mode and look like they're already conceding that one of the Yanks, Bosox and Astros are going to be the AL champions.
Instead of listing all the spring training games and the broadcast schedules for radio, tv and the MLB feeds, I thought it would wiser just to link the entirety.

The preseason games start Saturday February 23 with both of this weekend games being televised on Sportsnet and broadcast on the Sportsnet radio network.

Spring training ends with two games being played in Montreal on Monday March 25 and Tuesday March 26. The highlight of those games being that Vlad will be there before he gets sent down for more seasoning which should take until, oh I don't know, I'm guessing April12th, when he gets called up.

Regular season starts Thursday March 28th at home against the Tigers of Detroit.

It's already been confirmed that Mike Wilner and Ben Wagner will be the fulltime play by play announcers on radio. Wilner will no longer be the host of JaysTalk, that job will be handled by Scott MacArthur.

On the TV side, Buck, Tabby and Schulman will return. Jamie Campbell and Joe Siddall will be back to do Blue Jays Central. Arash and Hazel wil continue to be the on field personalities.

In case you haven't heard, Richard Griffin will be the Jays new PR Director, a job he held with the Expos.

There's a ton of questions to be answered this spring before the regular season begins,
Who will man the infield on opening day? Or the outfield?
What happens to Pompey, who is out of options?
Will Elvis be the youngest pitcher in Blue Jays history?
Will Vlad get intentionally plunked in a Spring training game or will that wait until the regular season? You know it's gonna happen.
Will one of Stroman, Sanchez, Giles, Pillar or Smoak get traded in Spring training?
Comments are welcome.
Posted by RADAR at 1:52:00 PM