Over the years we have seen more than a few free agents (most past their prime) come to our Jays and look entirely out of place in our uniforms. Roger Clemens came in for two glorious seasons 20 years ago and won back to back Cy Young awards! But he just didn't look right...On the other more unceremonious hand we had Jarrod Saltalamacchia join us for a cup of coffee and 1 hit in 25AB. Never felt right.

Check out a few of the biggest misfits, or guys who just look all wrong in a Jays uniform, below:

Frank Thomas: The Big Hurt was really hurtin' to begin his second season with the Jays. After a pretty solid first year (.277, 26HR, 95 RBI) Frank was once again starting very slow in 2008 before Gibby benched him for super utilityman Joe Inglett. The Jays released Frank soon after, saving the team 10MM. Fellow Maritimer and Fastball-Smashin' Legend Matt Stairs finished the year as DH. Love that dude! 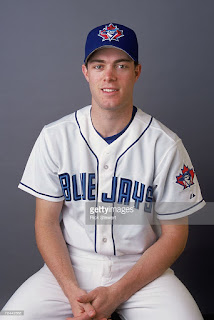 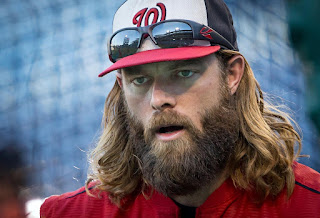 Jayson Werth: Most savvy Jays fans know that he started with the Jays. He became the misfit who got away. The Jays traded Werth for Jason Frasor, who must have added about 100 hours of baseball to our lives. Man that guy was a slow worker! Werth went on to become a 30 WAR career player, about equal to Jose Bautista. I had never seen him in an actual Jays uniform. Quite the difference!


Jose Canseco: What a badass! I loved it when the Jays brought in Jose. He last just 1 full season before departing for Boston. He claims it was the only season he did not use steroids, citing depression from a divorce. While researching Canseco I found the following amazing facts:

- has an identical twin brother, Ozzie, who played 23 games in the bigs and is known to impersonate his brother at baseball card and book signings (and a full season of The Surreal Life!)

- unknowingly became the first member of the 40/40 club (HR/SB), a club which now includes Bonds, Alex Rodriguez and Alfonso Soriano (?)

- had Tommy John surgery after demanding to pitch just 3 days after this infamous incident...

- won a Silver Slugger award for the Jays in 1998, the same year of Dave Steib's ill-fated comeback attempt, which is a great read, check out that article right here.

- retired in 2002 after being signed but cut by the Montreal Expos, and has been playing in independent leagues ever since.

- "claims" to have a black belt in karate and taekwondo, and has fought in a few hysterical matches, including a draw with Danny Bonaduce and this MMA first round knockout loss

I could go on, and on, Jose Canseco is quite a character.

Who do you think was the biggest Blue Jays misfit of all-time?