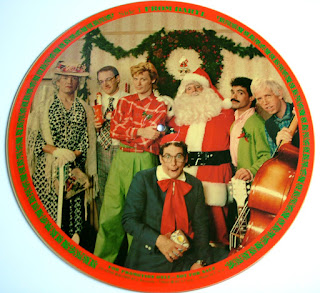 Hey, we're now officially in the holidays! (Hanukkah starts Sunday.) So what better time to celebrate that staple, the holiday song?

I decided that I was going to share my fave crazy holiday video, only to discover there's two versions!

In their heyday, Daryl Hall and John Oates covered Jingle Bell Rock. What I didn't realize was that each did lead vocal (they were both sides of the 45 pictured above) and they did separate videos for both! Personally, I prefer John's version (I'm not the only one) although Daryl's was the one that was released in 1983. They did put a mixed vocal version on a 2006 compilation.

According to my 1984 book on the boys (got waterlogged during a basement flood years ago but still readable), it's meant to be a video Christmas card. Thus, the changes are slight between the two, relating to who was singing lead. But both feature GE Smith in drag and record honcho Tommy Mottola as Santa Claus. (Mottola was their manager) The other house guests were the rest of their band - Mickey Curry on drums, Charlie "Mr. Casual" DeChant on sax, and Tom "T-Bone" Wolk on bass. I've been trying to figure out who the guys who don't get let in are because they look familiar. Are they roadies? The video directors Mick Haggerty and CD Taylor? I spent way too much time in the wee hours of Thursday night trying to find out.

I also discovered there was a literal version video done but sadly it's gone from the interwebs. Did find the lyrics for it though.They're pretty funny. However, I can show you a parody This Hour Has 22 Minutes did: