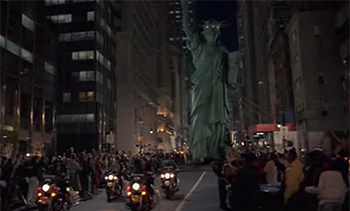 Seems some of you don't remember the epic sequel to the original Ghostbusters. This is your education.

The film has two really cool CGI moments. It featured the villain, Vigo, coming out of a painting.

The actor playing Vigo was a wrestler and a boxer who used the name "Prince" in the ring. He moved to acting and had some success but he was so difficult to work with roles dried up. He came to a sad end.

Later on, our heroes splatter the Statue of Liberty with ectoplasm and have her walking the streets of New York,

But the best thing about the film is its soundtrack. It's one of my faves.

First, the awesome rap that sums up the plot in the middle of this Bobby Brown song:


Then there's Run DMC's version of the Ghostbusters theme:


Then there's this great rap song from Doug E Fresh. I'm not a huge rap fan but love this old school stuff:


And now we come to my two faves. I love this little gem. Most people don't know of this song.


And this is a song I keep coming back to again and again. When Glen Frey died, this was my memorial song.