Walker in the Hall 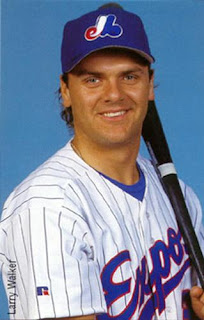 So young. So innocent.

For the second year in a row, the Gratitude post that comes after the HOF announcement gets preempted for a tribute thread. This time for Expos star and pride of BC, Larry Walker.

Larry and some other dude were elected last night. This was a long time coming for Walker, as too many baseball writers thought his numbers were a product of Coors, ignoring his success with both the Expos and the Cardinals. Thankfully, starting in 2017 some people decided to take on his case, park-adjusted his numbers (or pointed out that OPS+ and WAR takes ballpark into account), then started relentlessly writing articles lobbying for him. And with 6 votes to spare on his final year of eligibility, he got in.

First off, why is there an official Expos twitter?

He is the first Rockie to make it to the HOF and after the rough last few days, they're pumping it for all it's worth. Have already done a mock up of his plaque.

For Canada 🇨🇦
For the Rocky Mountain Region 🏔
For the #WalkerHOF champions 🙌

Walker is legend. Watch him wiping away a few tears as they tell him.

And look at what he's wearing.

His dad getting the news:

The moment your son is elected into the Baseball Hall of Fame! Larry Walker Sr the moment his son is named a Hall of Famer! #LarryWalker #BaseballHallofFame pic.twitter.com/jBafMhlTEz
— JAY JANOWER (@JayJanower) January 21, 2020

Lots of people congratulated him over twitter but I really liked this one.

Welcome on board Larry “Feo” Walker! Wayyy past due, so proud of you! Thanks for embracing me in my arrival to Montreal... True leader #canadianpride @baseballhall #LarryWalkerHOF
— Pedro Martinez (@45PedroMartinez) January 22, 2020

I missed most of his career as that was when I walked away from baseball. I'd love to hear your memories.

And for fun, look back at Lunchbox's predictions a year ago for how this vote was going to go. He was pretty close.
Posted by mktoronto at 7:00:00 AM