Other than most of the fans, the front office and beat writers, I can think of no one who will be happier to see ole Zeke take his talents elsewhere, than Buck Martinez.
Ezequiel Manuel Carrera Reyes was often a late inning replacement and as such, Buck was never quite sure if he should risk that 7th or 8th drink for fear of being flat out unable to pronounce Carrera's first name. Unfortunately for Buck, the additions of Ngoepe, Gift (hey, that sounds like he's an "unopened gift", nickname!, trademarked!), Grichuk, Randall and Seung Hwan Oh (who already has 2 great nicknames, "The Final Boss"/"Stone Buddha") will keep him wondering about those additional beverages.

Kidding aside, though Zeke was no doubt a lovable character, had moments of clutchness and seemed to be the good soldier Gibby could always turn to, he was, in fact, quite bad at his job. A constant adventure in the outfield, poor throwing arm, a career 23% strikeout rate (I actually have no idea if that's bad, Tim will correct me) with a career WAR less than 1, his abilities will not be hard to be replace. In fact, most would agree, they already have been with the outfielders the Jays obtained this year. He's no longer the only lefty bat, only speed threat nor the parrot wrangler we sadly no longer require. 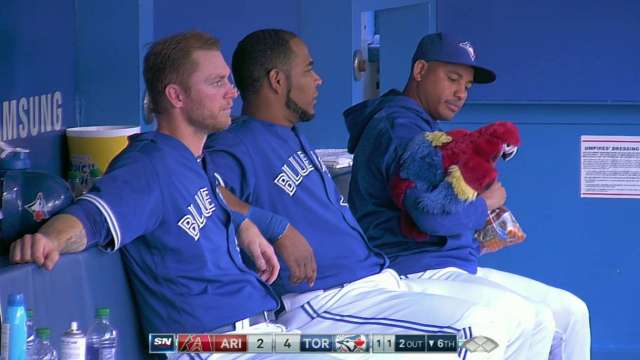 Zeke only spent 3 seasons with the Jays but he won't be forgotten soon. Until he becomes an obscure answer to a trivia question, good luck Zeke, all the best.